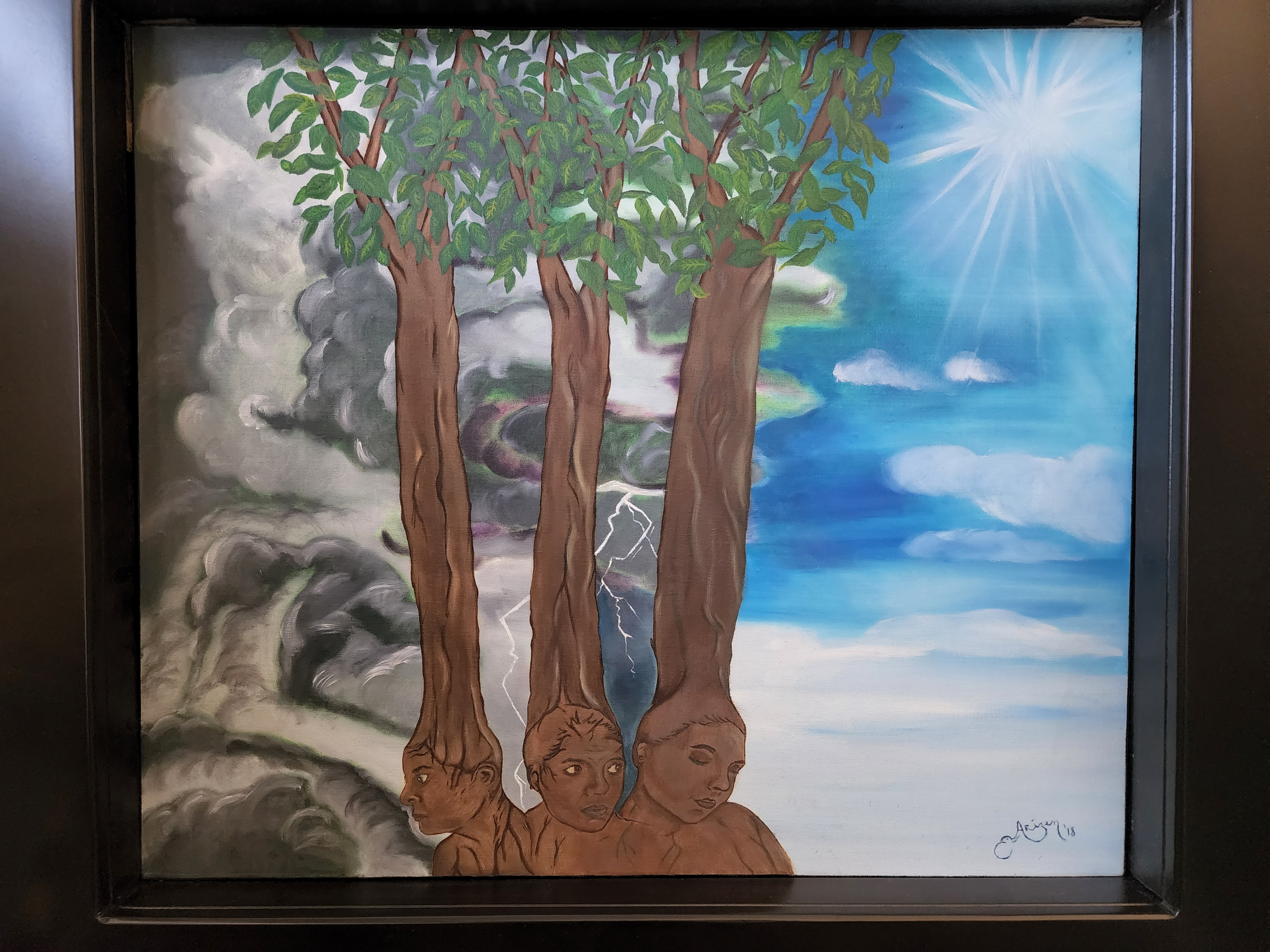 Since I was a little girl, I have been inclined towards art. The walls in my house were painted in colors with my drawings. I drew everything within my range. I recall playing my Disney films and then pausing them to draw the characters and scenes that filled my eyes. My mother became my accomplice, took me to art classes, museums, galleries, and exhibitions, and bought me books and materials. Little by little, I learned more about art techniques and theory… and it dawned on me that art was the best way to express myself.

Besides this, I supposed I had a supernatural gift, as I started experiencing “déjà vu” seven or eight times each day. People told me it could be a “message” or a gift to see beyond. Wow! For a teenager, those words were meaningful. Until one day, I was “disconnected.” Partial complex crises appeared, and I was diagnosed with epilepsy. What power!!! On medication, my social life and academic development evolved normally. But then my life changed. Due to my frequent crises caused by refractory epilepsy, but mostly due to ignorance, people around me got scared. I started suffering from memory loss, anxiety, and medicines’ secondary effects. I was battling against myself, full of insecurity and fear. Discrimination, prejudice, mockery, and negative comments all surrounded my life. People judged me and told me I was lying, as they said a person with epilepsy could not study and work simultaneously, and I did both. I was told, “you do not seem epileptic,” as if people with epilepsy should be a different color. I was even told I should quit studying and not marry since epilepsy could be contagious through saliva!!! I have often heard comments such as “poor girl, what a shame.  I cannot deny that everything changed.

I decided I would study and learn. I earned both an undergraduate and Master’s degree, made possible by a scholarship. In art class, the professor asked: “Is art beauty?” As I thought about the question, he said: Art does not have to do with beauty, as beauty is subjective. What is beautiful for one is not the same for another and vice versa. These words have accompanied me and become my philosophy in life since then. It made me leave behind whatever hurt and frustrated me. I have found mental and psychological strategies to compensate for the drawbacks I live with due to my frequent crises.

As I could not leave home for a week or more, I began to treasure the simple things. People told me I was mediocre. They wondered and criticized how I could find bliss in a brush for painting, in a park, or reading a book in a cafeteria. They deemed me crazy. It was hard to cope with, but instead of sinking in those words, I recalled my professor’s teachings, so I asked myself, “What is beauty, what is bliss, what is meant by success?” Success is doing what makes you happy and feels you do not need anything else; being in balance with yourself and all those around you. Bliss comes from within. Perhaps this does not work for everybody, but it works excellently for me.

As a Psychologist, I began to help people – both epileptic and healthy – by telling them about my personal knowledge and empathy, as I have lived with physical and emotional pain.

We can find solutions and channels that can change chaos to a state of being creative and transcendent, like a strong tree that grows and blossoms despite storms. Art is one of these channels. Art provides me with physical, mental, and emotional wellness as I work with my Brain, in the artistic part, and I concentrate, which therapeutically calms my mind and emotions.

The question “Does art help epilepsy, or does epilepsy inspire my art?” Both, since without art, I could not have dealt with all these emotions and even control physical sensations after a crisis. My epilepsy inspired my artistic side to become an active person in favor of breaking prejudice against this illness. Being life creations, all human beings are artworks. Magic is inside us when, instead of hiding or weakening during the storms in life, we opt for relaxing, acting and learning that, as in life and epilepsy… crises will pass. 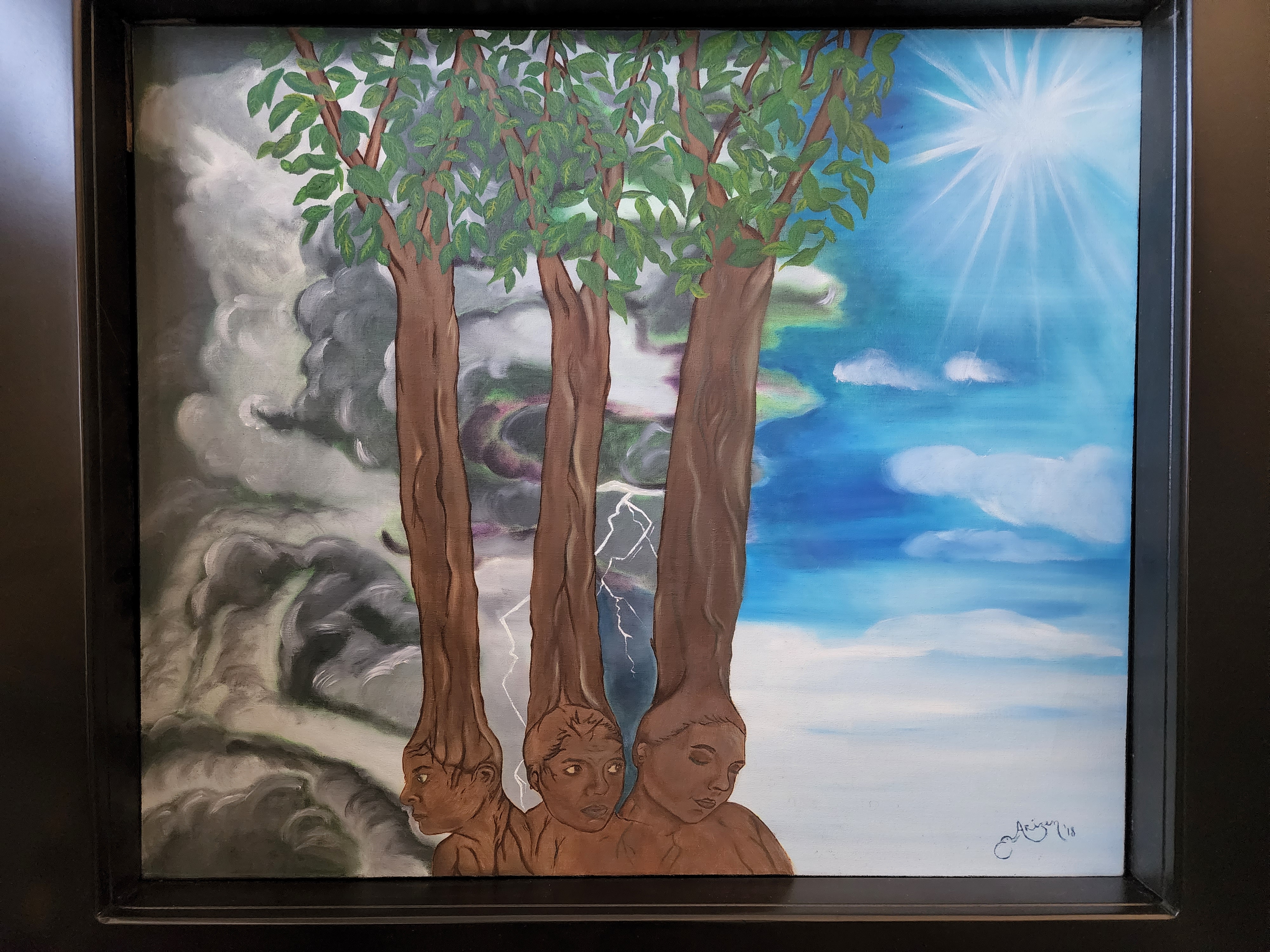